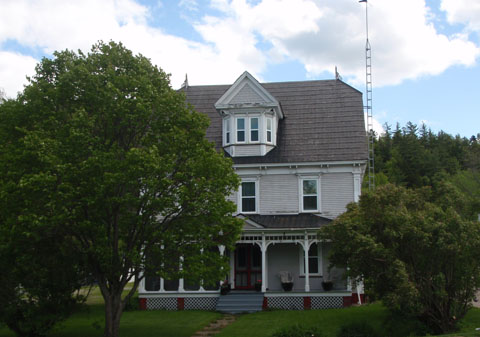 Description: The W.R. McCloskey Home is a Queen Anne Revival residence constricted c.1904. It is located on the south side of Route 8 and is situated within a grouping of period homes in the Boiestown region of the Rural Community of Upper Miramichi,

Heritage Value:  The W.R. McCloskey Home is designated a Local Historic Place for its architecture, for its association with its long-time resident William McCloskey and for its associative historical significance within the community. The W.R. McCloskey Home is the finest example of Queen Anne Revival architecture within the area, having much of its extensive ornament remains, It was originally constructed for David Sansom about 1904. Sansom was a relative of an accountant for local lumberman William Richards. Sansom was also business manager of the Boiestown Record, a very short lived 1901 newspaper, having only on issue published.

W.R. McCloskey, son of Irish immigrants Patrick & Sarah McCloskey, purchased the residence in 1907. He carried on in the merchant trade as did each of his parents and this purchase coincided with his business expansion and new store situated alongside his new home. McCloskey operated under the business name W.R. McCloskey Co. His widowed mother saw fit to see W.R. attend business college. This proved fruitful as he became very successful in the merchant business. McCloskey later ventured into the local lumber industry.

The W.R. McCloskey Co is still in operation and family has had a tradition of five generations in this business in the Boiestown region of Rural Community of Upper Miramichi.