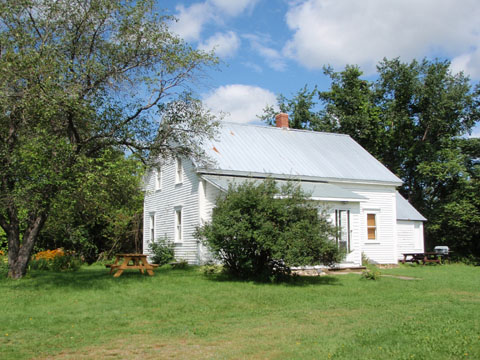 Description: The Aaron Hovey Jr. Homestead is a one-and-a-half story Cape Cod residence constructed prior to 1823. This former stagecoach stop is located on the North side of Route 8 in the region of Ludlow in the Rural Community of Upper Miramichi.

Heritage Value: The Aaron Hovey Homestead is designated a Local Historic Place for its architecture and for its association with its resident owner Aaron Hovey Jr.. It's good example pf Cape Cod architecture is one of the oldest homes in the area. Many of the original interior construction details are still present. The central placement of the chimney with an 8' by 8' base offered three open hearth fireplaces on the main level and one on the second level. Evidence of these is present.

The first resident of this home was Aaron Hovey Jr. , who settled in this area prior to 1809 along with his pre-loyalist parents and siblings. This place was the second home constructed for Aaron Hovey Jr. on this site and is a very elaborate home to be constructed at this time and reflects his prominence within the regions, taking two years to build. It predates the Great Miramichi Fire of 1825. Hovey operated a stage coach stop where horses were changed. Hovey grew orchards and produced wine for his patrons as evidence remains in the building of a laterally long and shallow wine shelf constructed into the stone chimney base. Hovey was a local cobbler and offered his trade from this home. Hovey's business interests branched into the lumber trade when in 1841 he was a manager of sorts to Richards Hutchison's Nashwaak holdings and investments in the firm Gilmour, Rankin & Co. The Year prior to this Thomas Boies, namesake to nearby Boiestown, defaulted in his lumber and business trade in this area to the lumber baron Hutchison. This homestead property has remained within the family.

The character-defining elements relating to the interior of the Aaron Hovey Homestead are: